Unusual Jewellery Gifts – with a bit of elegance

Are pearls old-fashioned? Most certainly not. Although a lot of peoples perception, when it comes to wearing pearls, is the vision of a grandmother or elderly aunt, well think again. Pearls, “the queen of gems” as they are known today, add that little bit of class and elegance, sophistication and mystique, and what lady doesn’t want to convey all of these attributes, whether you are in the workplace or spending the evening at the opera, pearls will always give that “je ne sais quoi“.

Unusual jewellery gifts, integrating the splendour of pearls, will be seen as both captivating and enchanting to the observer.

The harvesting of pearls goes back a long way, but who actually discovered them is unknown. They were used for decoration as far back as the 5th century BC by the Romans and Egyptians, and were exclusive to the rich and powerful.

Prior to the 5th century the Egyptians showed little interest in the pearl itself, and rather favoured the mother-of-pearl shell to adorn their jewellery. The first indication of the presence of pearls in China can be found in records dating back from as far as 2300 BC, pearls at this time were treated as prize possessions and were often bestowed upon royalty in the form of gifts.

Bet You Didn’t Know That……

Oysters are part of the salt water bivalve mollusc’s family and are responsible for the production of pearls. Oysters have no visible outward appearance of being male or female, and actually possess the ability to be either, making them protandric, meaning they can, over the course of a lifetime, change from male to female and then back to male, this cycle persists throughout adult life. For their first year or so they are male, but after their first spawn they change to female. Once the eggs are fertilized they develop into larvae, and during the second week the larvae is in its pediveliger stage, a stage in which the larvae will have a foot, the larvae will then congregate at the bottom of the river, and with the aid of their foot, search for a hard surface to settle on, this could typically be another oyster shell, once attached they are called spat. At this stage they start to create their shells by way of filtering calcium from the water, on average an adult oyster can filter 50 gallons of water a day. Oysters are known to grow up to an inch per year and are classed as adults at three years. 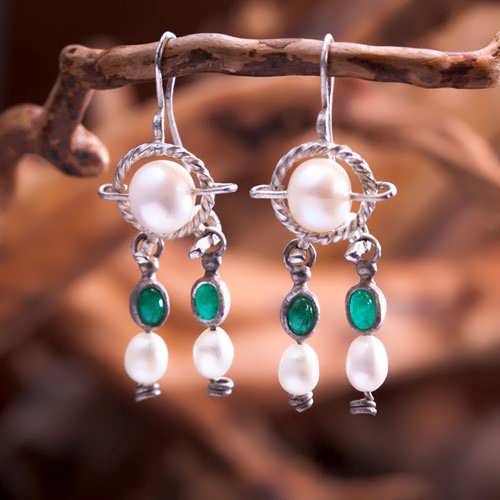 How Do Oysters Produce Pearls

Unlike other gemstones, pearls are not excavated from the ground, nor from other rock formations, and they definitely don’t grow on trees, so where do they come from? Pearls are actually produced by a living sea creature, the oyster, now I hear you say, “but how do oysters produce pearls”? The creation of a pearl is started when an irritant or foreign object, such as a grain of sand or some form of stray food, enters the oyster and gets lodged between its soft tissue and hard outer shell, this foreign object aggravates the soft tissue of the oyster, causing it to secrete a thin protective covering over the

irritant, this protective layer is called Nacre, also known as mother-of-pearl. Nacre is composed of aragonite and conchiolin, being a tough and insoluble form of crystallized calcium carbonate, layer upon layer of nacre is secreted by the oyster, which builds up over the foreign object, thereby forming the iridescent pearl as we know it.

Harvesting Of The Pearl

The beauty of the pearl is created by layers of nacre, which is strong and resilient, and has an iridescent appearance. Sadly an oyster will only produce one to two pearls in its lifetime and the creation process takes months, the actual time it takes is of course dependent in the type of oyster:

Akoya pearls are produced by the Akoya oyster (Pinctada fucata), which is native to the shallow waters of the Indo-Pacific. It typically takes 10 to 14 months for this oyster to produce a pearl with an average diameter of 9mm. These pearls are generally used in pearl strands due to being well-matched and near identical in size

As the name suggests, these pearls are obtained from oysters mainly found in the waters among the French Polynesia islands, Tahiti being the largest island. These pearls are produced by the Black Lipped oyster (Pinctada margaritifera), and take anywhere from 18 to 24 months to produce a pearl of roughly 10mm in diameter.

White Lipped oysters (Pinctada maxima) are much larger than the Akoya and Black Lipped oysters and produce a much larger pearl. The colour of these pearls can range from that of optic white to a deep honey gold, and tend to take between 2 and 4 years to produce, the size of these pearls are usually between 8mm to 20mm in diameter, but the average size being around 12mm. The northwest coast of Australia is generally the area that produces South Sea pearls.

Silver Lipped oysters, are known for producing pearls having colourings that are more silver, aqua and blue, and occasionally white.

Gold Lipped oysters, on the other hand tend to produce pearls being more cream, champagne and golden in colour.

Pearls farmers take great care when harvesting pearls, and generally use surgical-type instruments for this process.

Harvesting a pearl does not kill the oyster.

The Dawn Of The Cultivated Pearl

How did cultured pearls come into existence? In the early 1900’s a Japanese visionary called Mikimoto Kokichi, who was the son of a noodle shop owner, created the first cultured pearl. Due to the aggressive harvesting of the oyster beds, natural pearls were becoming increasingly scarce, with demand outweighing supply. Mikimoto become aware of this and came up with the idea of cultivating his own, after many failed attempts, and near bankruptcy, he eventually succeeded in 1893.

The process with which Mikimoto cultivated his pearls was by inserting an irritant inside a mollusc, forcing the secretion of nacre and the formation of the pearl, (much like the production of a natural pearl), the only difference being the human intervention. The technique of the cultured pearl has been perfected over the decades, and the production of spherical pearls is now common.

Once Mikimoto had mastered the production of the cultivated pearl, he opened a store around 1899, and still today, Mikimoto is renowned for its exquisite and fine quality pearls and jewellery. Mikimoto’s original single strand necklace, known as Taisho-ren (Boss’s Necklace), can be found at the Mikimoto museum on Pearl Island. The necklace consists of 49 large perfectly matched pearls, all of which were hand chosen by Mikimoto himself, and still today, classic Mikimoto pearl strands and created using this as a template.

Cultivated pearls are now produced on Pearl farms, Japan, French Polynesia and China being just three of the major pearl producing countries. Between the years 2005 – 2014, statistics show China as producing 98% of the globals fresh water pearls, with an estimated value of $15 million. The cultivated pearl is the most common pearl used today, and although natural pearls are still used, they come with a much higher price tag.

When It Comes To Value

The valuation process of a pearl takes into account 6 factors, and these 6 factors can cause a pearls value to differ considerably, depending on the outcome. The 6 factors that are considered in the valuation are:

Colour – most of us think of pearls as being white, but astonishingly they come in an array of colours, possibly the most rarest being that of a true blue pearl.

Luster – quality and quantity of the light reflected off a pearls surface is called its luster, and on a good quality pearl this should be brilliant and sharp.

Nacre Quality – nacre gives a pearl its luster, therefore nacre having a better quality will obtain a greater value. The durability of a pearl is also increased with thicker nacre and has a far better appearance.

Shape – to fetch a good value the shape of the pearl should be perfectly round.

Size – The size of a pearl can be the deciding factor if all other factors are equal, the value of the pearl will obviously increase with its size.

Surface – the surface of a good quality pearl should have little or no flaws, a very high luster, and 95% of the surface defect free.

In general, white pearls tend to be less expensive than those of the coloured varieties, although a natural white pearl would fetch far more than a coloured pearl that had been cultivated. South Sea white pearls are currently the most expensive of pearls available on the market.

Is there a way of telling if a pearl is real or fake? These most certainly is, this is known as the”tooth test“, basically a natural or cultured pearl has a rough surface (a slightly jagged texture), compared with that of a simulated or imitation pearl, the tooth test requires you to lightly rub the pearl against a tooth, and in doing so the pearl should feel gritty.

The Queen Of Gems

Popular to common belief, pearls are not always round, sometimes they are irregular in shape and non-spherical, more like a teardrop, these pearls are more commonly known as Baroque pearls. The Canning Jewel, so named after its first owner, Charles John Canning (Governor General of India), can be found in London’s Victoria and Albert Museum, and is one of histories most famous jewellery pieces, which was created using baroque pearls.

Jacqueline Kennedy Onassis was well-known for the wearing of pearls, which its been reported, were her all time favorite jewel, and she once quoted “pearls are always appropriate“. Her style and elegance have been the envy of many women and the appearance of pearls were a common sight.

A few other people well-known for wearing pearls are:

Cleopatra – who it is said, once served the most expensive meal in a wager with Marc Anthony, she dissolved her pearl earrings in vinegar and drank it.

Queen Elizabeth 1 – it is well-known that the queen was a huge lover of pearls, and portraits depict her wearing these in her wigs and being embroidered in her dresses.

Elizabeth Taylor – La Peregrina was gifted to Elizabeth in 1969 by Richard Burton, and history has it spanning over 500 years, the pearl was sold for $11 million at Sotherbys in 2011.

Coco Chanel – pearls are a key feature of the fashion house, and although Coco herself confessed that many of her pearls were fake, she was constantly seen with several strands around her neck.

Marilyn Monroe – known as the Marilyn Monroe Pearl Necklace, it was given to her while on honeymoon in 1954 by her second husband Joe DiMaggio, the necklace itself is a single strand of 44 Mikimoto pearls, the strand of pearls now forms part of a valuable collection of pearls belonging to Mikimoto (America), purchased in 1998.

Audrey Hepburn – was famous for that first scene in the 1961 film Breakfast at Tiffany’s, in which she can be seen wearing a pearl necklace while standing in front of the window display of Tiffany’s.

All in all, it can be said that pearls unquestionably compliment any outfit.

Find that Unusual Jewellery Gift, be it Sacred & Symbolic or adorned with Pearls, be the one to gift the “element of surprise”

8 thoughts on “Unusual Jewellery Gifts – with a bit of elegance”